Inputs for LoopWhile : to have dynamic x data to loop node actions

I’m trying to figure out the inputs for the LoopWhile node. I think the node you want looped goes into init but when it comes to creating the functions for the other two inputs continueWhile and loopBody I am not so sure

My aim: is to produce multiple Schedules from a list that’s been List.Chop’ed according to per-Schedule.

I have one KeySchedule node and the inputs include : ViewSchedule and Data.

My first loop will be the input to the ViewSchedule.
This is based on the fact that the schedules to write to won’t exist so first I will have a process to use one existing schedule, that is duplicated x times and then looped to feed the ViewSchedule input for KeySchedule.

The second loop will be the input for the Data, I already have all the data organised into sublist structure, so using List.GetItemAtIndex I need the Index number to go from 0…x (and each index will be the data for another schedule)

On this Topic please focus on what inputs go into:
-continueWhile
-loopBody

Below is a screenshot to illustrate my idea , please ask me questions if its not clear what I’m trying to get out.

In screenshot below, I have attached the LoopWhile to the index input for List.GetItemAtIndex as this is the integer that I want changing. Is this location in the sequence for LoopWhile correct?

For continueWhile = the value is greater than 1, so once it reaches 1 it should go onto the next integer
//// should it be less than or equal to 1? 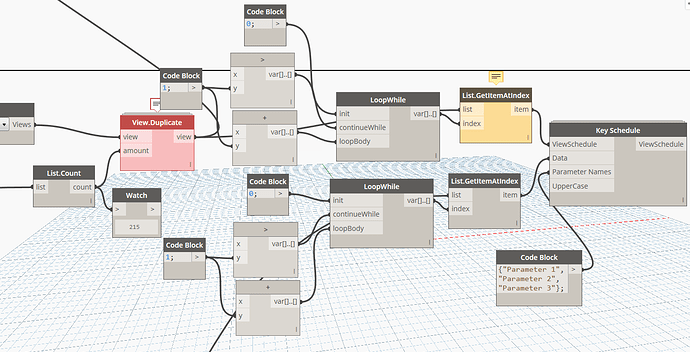 I’ve tried your solution, but if i export the results into excel i only get the first and last result.
Do you know how to get the results in between??