I’ve started this topic in another conversation with @JacobSmall. Since it was a separate topic, I created this new one.

I am using Revit 2022. I have a problem with the Generative Design study. I am stuck on generating randomization with GD.

I am using DynaShape to randomize bubbles. As inputs, I have a Revit element (Room) and a number of seeds. As the outputs, I have Space Adjacency Error and Space Adjacency Error Ratio. Changing the number of seeds I always get a value in outputs, so it is strange that it is not considered in the GD study. Also, bubbles are not displayed in the study, only the seed’s point. 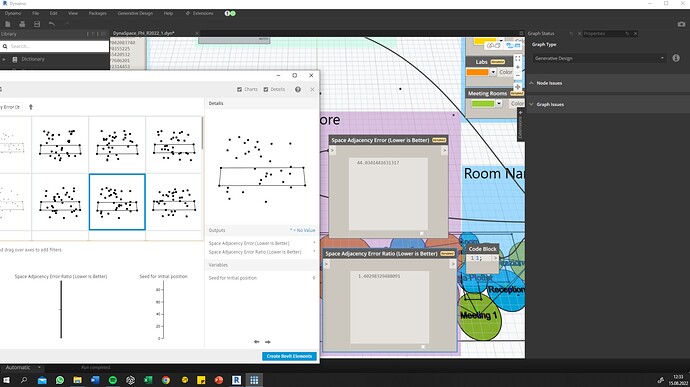 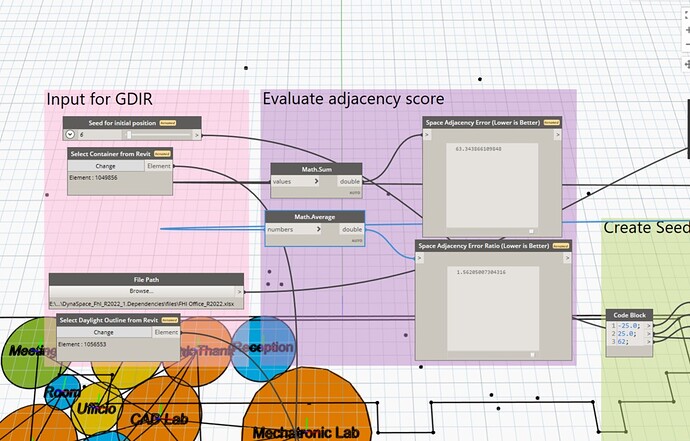 In my script, I use some packages like Clockwork to display colours and text on bubbles. They are using old Python2. Could it impact somehow the study?

Did you encounter a similar problem?

I got the answer from Jacob Small:

" Likely best to start a new topic as that’s a new issue. Some things to check:

I am not an expert in Dynamo, so perhaps I am doing something wrong and I have no idea where to find the root of the problem…

I would really appreciate your help.

Looks like you’re using sandbox 2.13 instead of whichever build (2.12?) you’re using in Dynamo for Revit; might not be the issue, or it might. In particular I don’t see the IronPython package in the dependencies, which if the Dynamo for Revit build doesn’t ship with could be causing the issue. Best to test matching versions. Also adding the dependencies folder to your node and package paths will not only save time (one action, no downloads or multiple clicks) but will better simulate what GD sees.

I found the solution for this problem, so I will share it in case someone else would have similar issues.
Using DynaSpace (DaynaShape for Dynamo version 2.7 or newer), I released that when I create file dependencies in Dynamo for the Generetive Design study, not all packages are included. I do not know why Dynamo is doing this, but it is always good to check, which packages are in the dependency folder and also check pkg.json file.
If there are no packages that are used in your script, copy them from the Dynamo Revit folder manually.
It should work, at least in my case, it’s working.