I’m at a loss! I’m creating a routine that will load a new titleblock .rfa file from our network into a model, and then change the type of an inserted titleblock to that newly loaded one.

I’m using some dialog boxes with Data-Shapes, and eventually get to a point where I’m using the “List.Combine” node with the “String.Concat” node as the “combinator”, the “Directory Path” node (within which I chose the folder on the network where the family exists) feeding into “list1”, a “string” node with a “” (backslash) feeding into “list2”, and, as a result of the user selecting one of the families from within that folder using the “UI.MulitpleInputForm ++” node, feeding into “list3”. This creates the directory and file path of the .rfa file I want to load into the model:

The “List.Combine” node outputs to the “List.GetItemAtIndex” node’s “list” input, with a “0” feeding into the “index” input. The output of that node feeds into the “Document.LoadFamily” node. When run, however, the “familyTypes” output says “null” and the “success” output says “false”.

I can’t figure out why. Any help would be GREATLY appreciated!

Not sure if it will make a difference, but you could try using a code block instead of list combine. Watch your slash directions too.

not sure either but how about this 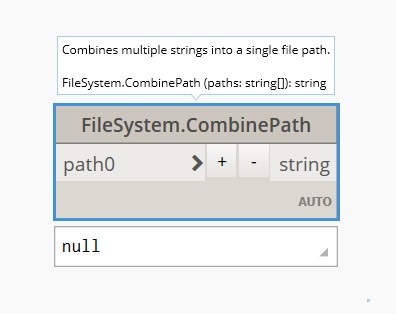 Doesn’t seem to do any combining. The two strings remain separate: 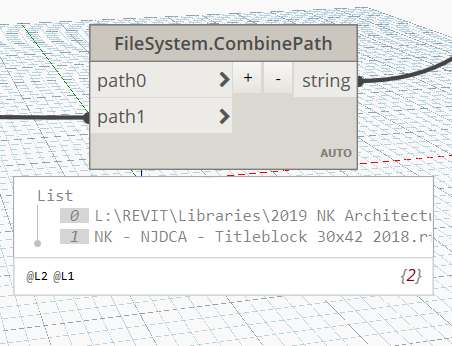 JUST FIGURED IT OUT. It was a good ol’ ID10T error! There was as subfolder inside the directory, inside of which was the .rfa file.